Do you know how long it takes for birds to build their nest?  Well, I don't but what I do know is that it is very similar to installing wood floors.  This past weekend while having our Sunday breakfast, Jeff and I saw two (mom and dad ) dove pigeons flying in and out of the tree in our backyard.  We saw each bird carry some sort of twig or leaf and they drop it off the part of the tree that has already some twigs and leaf on it.  As soon as Jeff saw this, he immediately went out to the backyard, took his broom and started removing some of the twigs and leafs.  I believe these birds are staring to build a nest.  It might look mean, but if and when they have completed the nest then the little ones will be born and it's now impossible to take down the nest because of the baby birds.  Jeff is worried that once the nest is there, these birds will be depositing droppings and the deck will be filled with you know what.
The similarity is that when Jeff was installing the living room and kitchen floors, he would take a piece of wood, picking some light or dark tones, then try to mix up sizes to create that nice effect.  One at a time, each piece is fitted to the groove and each piece is nailed to the floor.  It's really amazing watching him work as he pays attention to details and the craftsmanship that he puts into his work is very professional.  See for yourself. 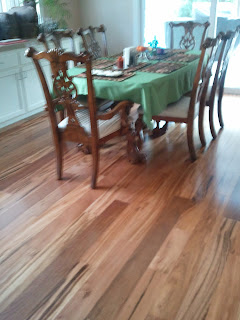 Posted by cranberryportage at 7:55 AM No comments:

Maybe Monday - In search for a new Massage Therapist

When you have been spoiled for many years with an amazing and experienced Massage Therapist, it's very hard to trust another one or try to replace her.  Her name is Carolyn.  She has been my therapist for many years.  Even after she took a break to have a family, I still waited for her to start her own business.  When she was working for other clinics, I would just follow her.  It was so great when she started her business because it was easier to book an appointment and it was much more relaxing as there was no such thing as a waiting room filled with other clients.  I truly miss her but now that I have waiting for a year and a half without getting a massage, it's time to find a new one.  I don't think Carolyn can be replaced, but it's a little too expensive to fly back to Canada just to have an hour massage.
Last week I finally decided to stop by this medical building close to our home.  There was no name posted outside the building except the words Chiropractor/Massage Therapist.  I went inside the building looking for the room and found a practice with 2 chiropractor, 1 psychologist and they were sharing the clinic and a couple of massage therapist.  Because it's a smaller practice I thought that it might be good because it will be more personal.  The price per hour is reasonable so I left my name and number for the therapist to contact me to confirm an appoint.  Her name is Ann and she called me right back within an hour and we confirmed a date and time for my session. I am so looking forward to having my hour of relaxation and getting the kinks that's caused by the Sciatica issues that seem to come back.
What are the benefits of having a great Massage Therapist?  Unkinks, Unknots, Destress, but most of all RELAXES the whole body, mind and spirit.  So in case you haven't had one in the last year or 6 months, then you too should find a new MT or book one with your current MT.
Which of the following type of MASSAGE do you prefer?
Swedish
Aromatheraphy
Hot Stone
Deep Tissue
Sports related
Shiatsu
Thai
Reflexology
Back
Facial
Posted by cranberryportage at 7:55 AM No comments:

Sunday, 29th day of the month.  There is nothing else I can't think of except the day my son passed away.  But today, I wanted to remember everyone we lost that particular year so I thought of writing a story similar to the movie "Five People You Meet In Heaven".
After arriving in a place so called heaven, Gino started his first walk around the garden.  He could not help but stop to help an elderly man who was trying to cross the small body of water.  Once they were in the dry land, Gino asked what the initial G stood for that was embroidered on his shirt.  The man replied - "it's for George". (1) George talked about the time he served in the Navy and was stationed in the Philippines.  Gino told him that his mother was born there but is now residing in San Jose after marrying Jeff.  George said, that is interesting, I have a son named Jeff who lives in San Jose.  The two G's continued walking, sharing very familiar stories.
The next day, they met again at the garden and this time George saw Gracie, his sister-in-law.  He introduced (2) Gracie to Gino.  She shared some stories with Gino after finding out that he is from Canada.  Gracie talked about her mother who was born in Canada and owned an Inn somewhere in Cranberry Portage, Manitoba. Gino said, that was interesting, my mother started a blog called Cranberry Portage. The three G's continued walking and shared some more familiar stories.
A week later Gino decided to walk a different garden.  He saw two lovely ladies who were laughing and seemed very happy.  When they saw Gino with a sad expression, they asked why the sadness.  Gino said, I miss my parents, my friends and most specially my sister.
They asked where he was from and were amazed that they were all from Ontario.  Gino asked where they worked and as soon as they replied, Gino's eyes lit up and said, my mom worked for the same Department.  (3) Silvana asked Gino if he attended his mom's wedding in Las Vegas.  Gino replied, I couldn't go because of the store, how about you? Silvana replied, I did not make it, but my husband is one of your mom's best friend and he gave her away at her wedding. (4) Tania asked Gino if he loved music.  Gino told them about going to Name That Tune every Tuesday night at a pub in Oakville.  Tania mentioned that her husband started going there and have been enjoying the company of Gino's friends.
Gino did not realize how all these people that he was meeting had some connection with him.  On his way to another different garden, he saw an older lady sitting quietly under a tree.  He did not want to disturb her but the lady waived at him to come over.  (5) Sylvia wanted someone to share her stories.  She asked Gino where he was born and he replied, Yellowknife.  She said that a long time ago her youngest sister lived and worked there.  Her sister lived in a big house across the street from a church.  Gino then said, when I was very very young, my grandparents lived in small house across the street from a church.  Gino added, I remembered going for a ride with my grandparents and one of their friends that lived in the big house across from the church.  Gino continued his story, I think I have met your sister; she was the one that was so impressed because I knew a lot of big words at the age of two.  But I also remember asking her how old she was.  I did not know then that it was not polite to ask a lady that question.
Maybe some of this might be true or maybe not but I would like to believe that our loved ones are not alone in whatever place they might be.  I would also like to believe that they are at peace and not suffering.  Maybe there is some truth about being together in the arms of an angel.
Posted by cranberryportage at 8:26 AM 2 comments:

Simply Saturday - Sometimes it's OK to be messy

Two full weeks of mess, dust, disorganize, hammer banging, power nail gun (sounds like a gun shot), electric saw, vacuum and some head ache.  So why am I putting up with all of these?  Because the end result will be much beautiful and easy to maintain.  I am talking about our living room and kitchen floors.  This weekend, Jeff will completely finish putting all the Tigerwood floors.  I was able to help a little during the past few days emptying the boxes of wood.  I sort them through to make sure the colors and design and size are together.  This way Jeff will just pick from the pile that he wants to use.  This weekend I will most likely do a little of cleaning and maybe even be allowed to paint part of the walls and some of the baseboards.

As he finishes different parts of the renovations, I will try to post more before and after photos.  For those of you who have stayed at our CPBB, you can now imagine some of this new feature of our home.
Posted by cranberryportage at 7:01 AM No comments:

FITB Friday - It's been a while

Since I have not followed this blog for a while, I thought I would do the last FITB that she had.  Before I follow along the FITB Friday, I would like to Congratulate Lauren on the birth of her daughter on January 15, 2012. My daughter follows her blog and that's how I found her FITB Fridays. She is postponing her FITB this week because she is getting to know the little one.


2.   The last song I listened to was   I love you this big by Scotty McCreary while driving on the way to do some shopping   .

3.  Using the letters in my name I can spell    {Luckie}...luck, ice, lie, lick, lice, like, kile, cue, kiel, luce,  .
4.  If I had to dress in one color for the rest of my life I would pick    black - only because like my daughter I have a lot of black pants, tops, dress, sweaters, shoes, flipflops.
5.  If you were to look in my bag right now you'd find    makeup, gum, wallet, reading glasses, 2 pens, insulin, record book, blood glucose meter, toothbrush, toothpaste, comb, keys, cell phone, nail file, hand sanitizer, photo of my daughter and son, business card holder, handkerchief, rosary, bluetooth, fan, and a few hard candies.
6.  When I finish filling in the blanks I'm going to   watch more tennis!  .

So far only one loss
Brady is a great boss
Always ready after the toss
That team will make it across.

How popular is my blog?

There is a small town somewhere in Manitoba named Cranberry Portage. My husband's great grandmother owned a small property there. While looking for a recipe, I stumble on a cookbook from Cranberry Portage. During my daughter's recent visit we talk about having a name for our home which becomes a bed and breakfast for our Canadian visitor. She suggested Cranberry Portage and I loved it. So the name of my blog was born.

NFL, NHL, CFL, NBA
Whatever you follow
Always try to be mellow
It's just a sport, don't be shallow.

Summer is just around the corner
Visitors will arrive and I will take their order
Neighborhood events are also planned
Eating and drinking will not be banned.

When you fail to care for others,
you don;t care for yourself.
When you help others live better,
it's your life that gets better.